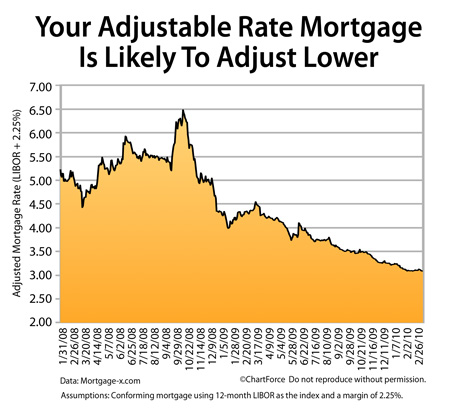 If your mortgage is set to adjust this year, the smart move may be to let it. Today’s conforming mortgages are adjusting lower than ever before — as low as 3 percent.  It may not be what you expected when you signed for your ARM several years ago.

The reason why ARMs are adjusting lower is because of how they’re made.

When conforming adjustable-rate mortgages adjust, they adjust according to a pre-determined formula. The formula is the sum of a constant and a variable.  The constant is usually 2.25 percent and the variable is a daily-changing interest rate called LIBOR.

LIBOR is an acronym for London Interbank Offered Rate.  It’s an interest rate at which banks borrow money from each other. In Fall 2008, when Lehman Brothers fell and sparked a global banking fear, LIBOR spiked as the risk of inter-bank borrowing jumped.

Since then, however, LIBOR is down.

Normalcy is returning to banking and the timing couldn’t be better for San Fransisco homeowners with ARMs. 15 months ago, a homeowner’s ARM may have adjusted to 6 1/2 percent.  Today, that same ARM falls to just above 3.

As a strategy play, it might make sense to let your ARM adjust. Or, because fixed rates are still near 5 percent, converting that ARM to a long-term fixed-rate product might make sense, too.  The decision is a balance between how low do you want your payment, and how long might you live in your home.

The longer you stay, the more it might make sense to switch to fixed-rate, even though ARM rates are so low.

If you’ve got an adjusting ARM, talk to your loan officer about your choices. Once March ends and the Fed withdraws its mortgage market support, mortgage rates may rise and the fixed-rate option may be gone.