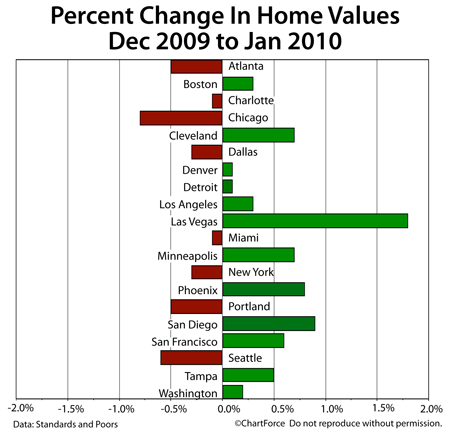 Standard & Poors released its Case-Shiller Index Wednesday. The report shows that, on a seasonally-adjusted basis, between December and January, home prices rose in more than half of the index’s tracked markets.

The strength of this month’s Case-Shiller report, however, should be put in context.

For one, the report is on a 2-month delay; it’s showing data from January, before the start of the Spring Buying Season and before the rush to beat the tax credit. Anecdotally, buyer interest has been strong since, leading to the types of multiple offer situations that drive home prices northward.

In other words, home values may be even higher than what’s reflected in the January Case-Shiller data above.

Furthermore, the Case-Shiller Index measures home values in just 20 cities nationwide and they’re not even the 20 biggest cities. Houston, Philadelphia, San Antonio and San Jose are specifically excluded from the report and each ranks among the country’s 10 most populous areas.

Despite its flaws, though, the Case-Shiller Index remains important. Much like the government’s Home Price Index, the private-sector report helps to finger broad housing trends and housing is still considered a keystone in the U.S. economic recovery.

Even if it’s two months slow.