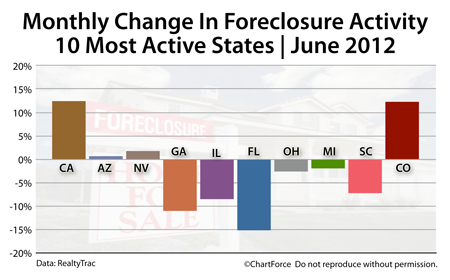 The number of U.S. homes receiving foreclosure notices topped one million through the first six months of 2012, according to RealtyTrac.

There were 1.046 million foreclosure filings between January – June 2012, says the foreclosure-tracking firm in its Midyear 2012 Foreclosure Market Report. The tally represents a 2 percent increase from the immediate six months prior.

One notable fact from within the report is that, even as the number of repossessed homes dropped nationwide, the number of homeowners receiving a Notice of Default or lis pendens rose. These notices are the first step in the foreclosure process which means that we should expect the national foreclosure pipeline to fill later this year.

It’s no coincidence that foreclosure starts are rising now, either.

Earlier this year, a $25 billion mortgage servicing settlement provided banks with the necessary framework and rules by which they can foreclose upon a home. Prior to the this settlement, fearing legal liability, some banks chose to slow — or halt — foreclosure starts entirely. Since the settlement’s announcement, though, foreclosure activity has resumed.

For today’s San Francisco home buyers, the foreclosure market represents an interesting opportunity. Homes purchased while in the various stages of foreclosure can often be purchased for a lower price than homes which are not in foreclosure; one reason why foreclosed homes account for 25 percent of all home resales.

However, be careful that you don’t confuse “less expensive“ with “less costly“.

Foreclosed homes are often sold as-is and may be in various stages of disrepair at the time of purchase. Spending money to repair a foreclosed home in order to make it habitable could wipe out the money saved on its sales price. Your best real estate “deal”, therefore, may be a non-distressed home in sound, move-in ready condition.

If you’re buying foreclosures — or even considering it — be sure to talk with a real estate agent. The process of buying a foreclosed property is different from buying a “regular” home. You’ll want somebody experienced on your team.