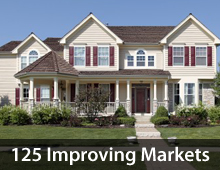 The U.S. economy continues to improve.

The National Association of Homebuilders released its Improving Markets Index Tuesday. The report attempts to identify U.S. metropolitan areas in which the economy is improving, demonstrating “measurable and sustained growth”.

125 U.S. markets are qualified as “improving” this month, a 22-market jump from the month prior and and all-time high for the index which launched late last year.

Compared to November 2011, this month’s IMI has climbed more than four-fold, rising from last year’s reading of 30. This jump suggests that housing recovery is firmly taking root, helping to generate needed jobs and economic growth across much of the country.

So what qualifies a market as “improving”? The NAHB uses strict criteria.

Next, for each of the above data sets, the National Association of Homebuilders separates for local data in each U.S. major metropolitan area.

And, lastly, armed with data, the NAHB looks for areas in which growth has occurred for all three data points for six consecutive months; and for the most recent “bottom” is at least six months in the past.