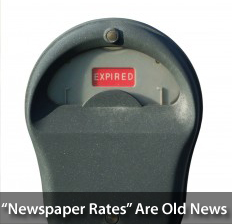 It’s been a wild 30 days for home affordability.

Since the Federal Reserve’s November 3 press release, in which our nation’s central banker committed $600 billion to bond markets, mortgage rates have leaped, moving quicker than the news can report them.

This week is a terrific example of that.

Today, newspaper headlines in California and around the country read that mortgage rates rose 0.06% on average over the past 7 days, and that average loan fees remain unchanged at 0.8 points. The data is based on Freddie Mac’s Primary Mortgage Market Survey, a weekly poll of more than 100 lenders around the country.

Unfortunately for Lafayette home buyers and other local rate shoppers, the Freddie Mac figures are low. Both mortgage rates and fees rose by more than what’s being reported.

Freddie Mac’s data is not real-time. It’s out of date for today’s pricing.

According to Freddie Mac, the survey’s methodology has it collecting rates from participating lenders between Monday and Wednesday, averaging the results, and then publishing that data Thursday late-morning. The problem there, as you know if you’ve shopped for a mortgage rate, is that mortgage rates change all day, every day.

Monday’s rates are unrelated to Wednesday’s rates, yet both are included and given equal weight by Freddie Mac. Some weeks, it’s not a problem; rates are relative static.

This week was not such a week.

Rates were jumpy Monday and Tuesday, rising and falling throughout the course of the day. Action like that is normal. But Wednesday, mortgage bonds put forth their third-worst daily showing of the year.  Rates rose by as much as 3/8 percent between the market open and close, with the bulk of the sell-off coming late in the day. In other words, after the deadline of Freddie Mac’s survey.

Mortgage lenders accurately reported their rates to Freddie Mac, but they reported them before the market turn a turn for the worse.