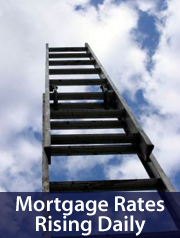 This is a huge increase from just 11 weeks ago when mortgage rates were riding an 8-month-long hot streak, and appeared headed into the 3s. Then the Federal Reserve intervened.

On November 3, as additional support for markets, the Fed announced its second round of bond buys, a $600 billion program dubbed QEII — short for Quantitative Easing, Round II. Wall Street got spooked on the news; investors feared runaway inflation.

(A) Inflation makes the U.S. dollar lose its value,

And, (B) U.S. mortgage bond payments are paid in U.S. dollars.

When mortgage bond repayments are worth less, bond demand falls among the global investor set and that causes bond prices to fall along with it. When bond prices fall, mortgage rates rise and that’s exactly what we’re seeing right now.

Since the Fed’s QEII announcement, mortgage rates have soared and home affordability is taking a hit.

Given recent trends, it’s probably safe to declare the Refi Boom “officially over” and the era of low mortgage rates may be over, too.  Home prices may move up or down in San Francisco this year, but rising mortgage rates could render the point moot. If you’re looking for a great “deal” with low, long-term payments, the time to get in contract may be now.

Because of rising rates, homeowners have lost roughly 10% of their purchasing power since November.