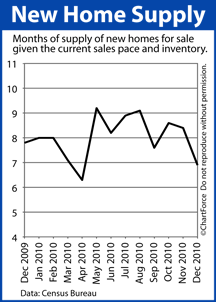 Sales of new homes rose sharply in December, posting a 17.5 percent gain from the month prior.

According to the Department of Housing and Urban Development, New Home Sales climbed to 329,000 in December, besting November by close to 50,000 units on a seasonally-adjusted annual basis.

Last month’s reading is an 8-month high for New Home Sales, and the latest in a series of signals that housing is improving in Walnut Creek and around the country.

Furthermore, an interesting pattern is emerging in the price points of home sales. The highest levels of relative growth are occurring within the “move-up buyer” segments. Entry-level price points are lagging the market, as a whole.

Luxury homes accounted for less than 5% of the newly-built home market, suggesting that California homeowners are either not “buying new” as frequently, or are choosing to renovate their existing properties instead.

The 2010 housing market finished on a tear, and that momentum is carrying forward into 2011. Expect the spring season to show strongly, putting pressure on home prices to rise.

Coupled with rising mortgage rates, the long-term cost of homeownership is unlikely to be as low as it is today.