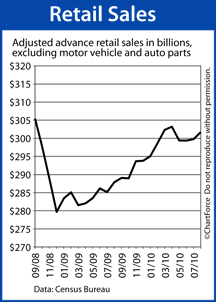 The recent rise in mortgage rates was slowed this week after the government released its Retail Sales report for August.

Prior to Tuesday, mortgage rates had been spiking across California on the resurgent hope for U.S. economic recovery. The sentiment shift was rooted in reports including the Pending Home Sales Index and Initial Jobless Claims, both of which showed surprising strength last week.

August’s Retail Sales, though, after removing motor vehicles, auto parts and gasoline sales, failed to maintain the momentum. Its figures were actually in-line with expectations — it’s just that expectations weren’t all that high.

Wall Street now wonders whether the weak Back-to-School shopping season will trend forward into the holidays.

Because Retail Sales is tied to consumer spending and consumer spending accounts for two-thirds of the economy, a weak reading tends to drag down stock markets and pump up bonds, and when bonds are in demand, mortgage rates fall.

This is exactly what happened Tuesday. The soft Retail Sales data eased stock markets down, and generated new demand for mortgage bonds. This demand caused bond prices to rise, which, in turn, caused mortgage rates to fall.

With mortgage rates at historical lows, it’s an excellent time to look at a refinance, or gauge what financing a new home would cost. Low rates like this can’t last forever.