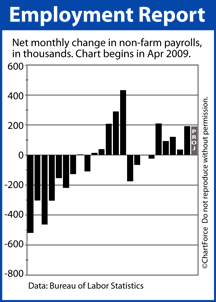 Friday is a pivotal day for mortgage markets and conforming mortgage rates across California. At 8:30 AM ET, the government will release its March Non-Farm Payrolls report.

More commonly known as “the jobs report”, the monthly Non-Farm Payrolls is a market-mover and home buyers would do well to pay attention. Depending on the report’s strength, mortgage rates could rise, or fall, by a measurable amount tomorrow morning.

It’s because so much of the today’s mortgage market is tied to the economy, and economic growth is dependant on job growth.

With more job growth, there’s more consumer spending and consumer spending accounts for the majority of the U.S. economy. Additionally, it generates more payroll taxes to local, state and federal governments. This, too, puts the broader economy on more solid footing.

Between 2008 and 2009, the economy shed 7 million jobs. It has since recovered 1.5 million of them. Friday, analysts expect to count another 190,000 jobs created. If the actual figure falls short, expect mortgage rates to ease.

Otherwise, look for rates to rise. Probably by a lot.

If you’re shopping for a mortgage right now, consider your personal risk tolerance. Once the BLS releases its data, it will be too late to lock in at today’s interest rates. If the idea of rising mortgage rates makes you nervous, execute your rate lock today instead.