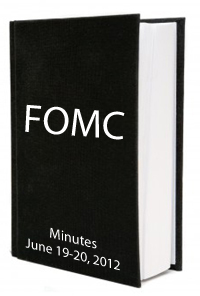 The Federal Reserve released the minutes from its June Federal Open Market Committee meeting, revealing a Fed divided on the future of the U.S. economy. Mortgage rates are higher after the release of the minutes.

The Fed Minutes is the detailed recap of an FOMC meeting. It is the companion piece to the more brief, more well-known post-meeting FOMC press release.

For a comparison, whereas the Fed’s June 20, 2012 press release contained 5 paragraphs and 490 words, the same meeting’s minutes contain 62 paragraphs and 7,508 words. The extra detail afforded by the extra words Wall Street gives insight into the nation’s central banker.

The June Fed Minutes, for example, suggest that the Fed may soon add new economic stimulus.

Recent data suggests that the U.S. economy is expanding, but more slowly that it was at the start of the year. The Fed acknowledged that this, in part, is the result of “below-trend” growth in Euro-area economies, plus a general slowdown in China.

The Fed also said that “strains in global financial markets” continue to pose “significant downside risks” to the U.S. economy. The Fed expects U.S. growth to “moderate over coming quarters”.

Other notes from with the Fed Minutes included :

In addition, there was discussion about whether the Fed is missing its dual mandate of low inflation and low unemployment. Several Fed member discussed the need for new stimulus to raise employment and to raise the rate of inflation. This action could occur as soon as next month.

The next Federal Open Market Committee meeting is a 2-day affair scheduled for July 31-August 1, 2012.