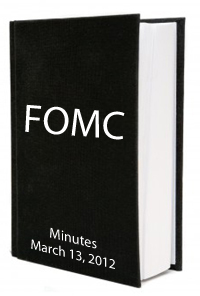 The Federal Reserve has released the minutes from its last FOMC meeting, a 1-day affair held March 13, 2012. Mortgage rates in California are rising on the news.

For the un-indoctrinated, 3 weeks after it meets, the Federal Open Market Committee, the sub-group within the Federal Reserve that votes on U.S. monetary policy, publishes its meeting minutes.

Similar to the minutes from a corporate event, or condominium association meeting, the Fed Minutes recounts the conversations and debates that transpired throughout the meeting.

The Fed Minutes is a lengthy publication, often filling 10 pages or more. By contrast, the more well-known publication from the FOMC — its post-meeting press release — tends to span 6 paragraphs or less.

The extra detail contained within the Fed Minutes is Wall Street fodder, especially given the current economic uncertainty. Investors look to the Federal Reserve for clues about what’s next for the U.S. economy.

Lately, the minutes has made an out-sized impact on mortgage rates. The Fed’s words continue to swing the mortgage-backed bond market.

Today is no different.

March’s Fed Minutes is a dense one and markets are reacting. The text shows a central bank softly divided on future U.S. economic policy, and in debate about whether existing market stimulus should be removed.

The Fed has said that it’s expecting high levels of unemployment and low levels of inflation in the coming months, an outlook that leaves little reason to introduce a third round of stimulus. This is the primary reason why mortgage rates in Lafayette have been climbing since the Fed Minutes’ release.

Since mid-March, mortgage rates dropped on speculation that the Federal Reserve would introduce a mortgage bond purchase program this quarter. Today, those expectations have reversed.

According to the minutes, the Federal Reserve believes that additional market stimulus would only be necessary “if the economy lost momentum”, or if inflation remained too far below 2 percent per year. Currently, Core PCE — the Fed’s preferred gauge of inflation — is running slightly below 2 percent.