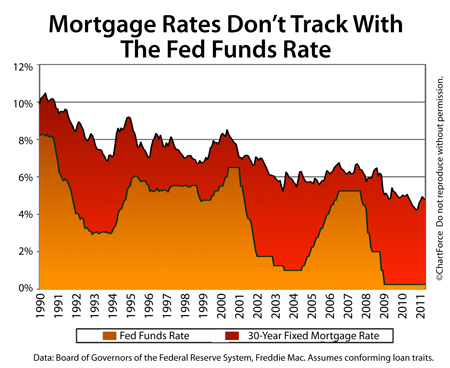 The Federal Open Market Committee starts a two-day meeting today, the third of its 8 scheduled meetings this year.

The FOMC is a special, 12-person committee within the Federal Reserve. It’s led by Fed Chairman Ben Bernanke and the group is responsible for voting on our nation’s monetary policy. This includes setting the Fed Funds Rate, the rate at which banks borrow money from each other overnight.

Today, the separation between the Fed Funds Rate and the national average for a standard, 30-year fixed rate mortgage is 4.625 percent. This spread will widen — or shrink — beginning 12:30 PM ET Wednesday. That’s when the FOMC adjourns and releases its public statement to the markets.

According to Wall Street, there’s a 100% chance that the FOMC leaves the Fed Funds Rate in its current “target range” of 0.000-0.250 percent, the same range in which it’s been since December 2008. Depending on the verbiage in the press release, plus the comments of Fed Chairman Ben Bernanke in his scheduled, 2:15 PM ET press briefing, mortgage rates aren’t expected to steady as well.

If the Fed projects higher growth in late-2011/early-2012, or hints at new market stimuli, expect mortgage rates to rise on concerns about inflation. Inflation is bad for mortgage rates, in general.

On the other hand, if the Fed indicates that the economy is slowing down, or that it plans to withdraw its existing, $600 billion bond market stimulus, look for mortgage rates to fall.

It’s hard to be a home buyer in the Orinda area when the Federal Open Market Committee meets. There’s just so much that can change mortgage rates and rising mortgage rates can affect purchasing power in a flash.

So, if you’re shopping for mortgages, or just floating a rate, consider getting locked in before the FOMC issues its press release Wednesday. Once the statement hits, mortgage rates could soar.