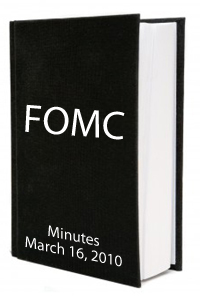 Mortgage markets improved yesterday after the Federal Reserve released its March 16, 2010 meeting minutes. It’s good news for in Lafayette home buyers and rate shoppers — rates could have just as easily gone the other way.

The Fed Minutes is a detailed recap of the debate and discussion that shapes the nation’s monetary policy. The notes are dense; it takes 3 weeks to compile them for publication.

As compared to the more well-known, post-meeting press release, the Fed Minutes are extremely lengthy. For example:

If the press release is the executive summary, the Fed Minutes are the novel.

This is why the report is important to every rate shopper in the country.

When the Federal Reserve publishes the minutes from its meetings, it leave clues about the groups next policy-making steps.  For example, in March’s Fed Minutes, it’s clear that the Fed’s concern about inflation is hugely diminished and that’s a major plus for the mortgage bond market.

Inflation causes mortgage rates to rise. The absence of inflation, therefore, helps them to fall.  This improves home affordability, among other things.

Similarly, the Fed Minutes note that real estate sales may have been worse throughout the winter months if not for low mortgage rates and the sense among Americans that home prices were troughing. We may infer, therefore, that rising rates may suppress home sales later this year.

Markets are always looking for clues from inside the Fed and the last meeting’s minute signal that the economy is on its way up.  If you’re looking for a bargain in the housing market, your window to act may be closing.