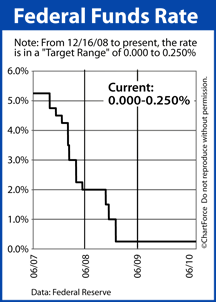 The Federal Open Market Committee holds a one-day meeting today, its fifth scheduled meeting of the year, and sixth overall since January.

The FOMC is the government’s monetary policy-setting arm and the group’s primary tool for that purpose is an interest rate called the Fed Funds Rate.

The Fed Funds Rate is the prescribed rate at which banks borrow money from each other and, since December 16, 2008, the Federal Reserve has voted to keep the benchmark rate within a target range of 0.000-0.250 percent.

Because the Fed Funds Rate is near zero, it’s accommodative of economic growth, spurring businesses and consumers to borrow money on the cheap. This, in turn, fosters economic growth within a U.S. economy that is somewhat tentative and facing headwinds.

The Fed has said over and again that it will hold the Fed Funds Rate “exceptionally low” for as long as conditions warrant.  It’s expect that the Fed will reiterate that message in today’s post-meeting press release.

However, just because the Fed Funds Rate won’t be changing today, that doesn’t mean that mortgage rates won’t.  Mortgage rates are not set by the Federal Reserve; open markets make mortgage rates.

Mortgage rates in California tend to be volatile when the Fed is meeting. This is because the Fed’s press release highlights strengths and weaknesses in the economy and, depending on how Wall Street views those remarks, bond markets can undulate and mortgage rates are based on the price of mortgage-backed bonds.

The Fed’s press release today will be dissected and analyzed.  Talk of higher-than-expected inflation, or better-than-expected growth should have a negative effect on rates. Talk of an economic slowdown may help rates to fall.

Either way, we can’t be certain what the Fed will say or do this afternoon so if you’re floating a rate right now and wondering whether the time is right to lock, the safe choice is to lock before 2:15 PM ET today.