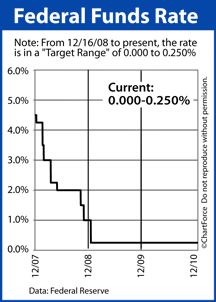 The Federal Open Market Committee holds a one-day meeting today, its 8th scheduled meeting of the year and 10th overall.

2 years ago Thursday, in an effort to jump-start the economy, the FOMC met and voted to lower the Fed Funds Rate to as close to zero percent as possible without actually going to zero percent; the benchmark rate was prescribed to a range of 0.000-0.250 percent.

The Fed Funds Rate had never been set so low before, but ever since, it’s been held to that range. It will likely be there until early-2011, too, but that doesn’t mean that mortgage rates won’t change today when the Fed adjourns today.

Because the Fed Funds Rate has been so low for so long, businesses and consumers have been able to borrow money cheaply. As a result, both capital and household spending have been on the rise lately, creating tailwinds for the economy.

The Fed is expected to acknowledge this today which, in turn, should lead mortgage rates higher.  This is because, in the current recovery cycle and until markets find balance, what’s good for the economy tends to be bad for rates in Lafayette.

The Fed’s press release today will be a focal point for markets.  Talk of higher-than-expected inflation or better-than-expected growth, and mortgage rates should rise. Talk of a slowdown should lead rates lower.

Either way, we can’t be certain what the Fed will say — or do — this afternoon. If you’re floating a mortgage rate, the safe move is to lock before 2:15 PM ET today.