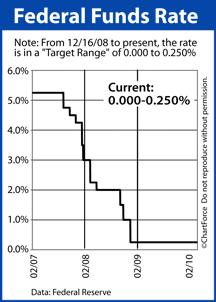 The Federal Open Market Committee adjourns from a scheduled 1-day meeting today, its second of the year.

After each FOMC meeting, Fed Chairman Ben Bernanke & Co issue a formal press release to the markets.  At roughly 400 words, the statement is a brief commentary on the strengths, weaknesses, and threats for the U.S. economy.

Wall Street watches the statement with great interest and this is why mortgage rates are often volatile on the days of an FOMC adjournment. One mention of a word like “inflation” and traders rush to dump their mortgage bond positions.

Inflation is the enemy of mortgage rates.

After the Fed’s last meeting in January, it told us that the economy had “weakened further”, led by steep declines both in housing and employment. Global demand was off, too.  The negative tone of the Fed’s statement caused mortgage rates to fall to near an all-time low.

Since January, there’s been a modest rebound in housing, employment appears more stable, and Retail Sales just posted huge gains.  If the Fed alludes to improvement in any or all three, mortgage rates will likely reverse and zoom higher.

We can’t know what the Fed today will say so if you’re floating a mortgage rate and wondering whether to lock, the safe approach would be to do it today, prior to 2:15 PM ET.