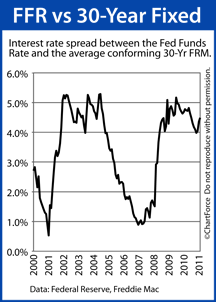 The Federal Open Market Committee begins a 2-day meeting today in Washington D.C. It’s the group’s first meeting of 2011 — one of 8 scheduled for the year.

Because Wall Street watches FOMC meetings closely, so should you. The meetings provide insight on the future of U.S. monetary policy, as told by the nation’s central banker. Investors make trades based on the FOMC’s commentary which is one reason why mortgage rates tend to undulate through the hours leading up to the FOMC’s adjournment, and the days immediately after.

Wall Street is shifting old bets, and placing new ones.

A terrific example of this is what happened after the Fed’s November 3, 2010 meeting.

In its post-meeting press release, the Federal Reserve announced a new, $600 billion, market-bolstering plan dubbed “QE2”. Wall Street had widely expected the Fed to create the program, but had underestimated its size.

Starting a $600 billion program sparked fears of a Fed-led inflation run, which, in turn, caused mortgage markets to deteriorate in a hurry. In the 3 days following the program’s announcement, mortgage rates spiked to multi-month highs and have not since recovered.

QE2 marked the beginning of the end of the Refi Boom and low rates. Today, conforming rates in California are relatively low as compared to higher, but are much higher than they were prior to the FOMC’s November 2010 meeting.

Then, December’s FOMC meeting did little to change the direction of rates. We shouldn’t expect that January’s will, either. After the FOMC’s 2:15 PM ET adjournment Wednesday, mortgage rates should resume climbing, as they have done for the past 10 weeks.

If you’re shopping for a mortgage rate, therefore, the prudent move is to lock prior to Wednesday’s FOMC adjournment because, after once the Fed’s outlook is released, it will be too late.