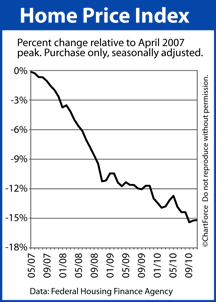 Home values were reported unchanged in November 2010, on average, according to the Federal Home Finance Agency’s Home Price Index.

We say “on average” because the government’s Home Price Index is a data composite for the country. The index doesn’t measure citywide changes in places like Walnut Creek , nor does it get granular down to the neighborhood level to measure places like Lamorinda.

Instead, the Home Price Index groups state data in 9 regions with each regions having as few as 4 states in it, and as many as 8.

Not surprisingly, each of the regions posted different price change figures for the period of October-to-November 2010.

That said, none of these numbers are particularly helpful to today’s home buyers and sellers and that’s because everyday people don’t buy and sell homes on the Regional Level. We do it locally and the government’s Home Price Index can’t capture data at that level.

It’s a similar reason to why the Case-Shiller Index is irrelevant to buyers and sellers.

November’s Case-Shiller Index showed home values down 1 percent in November, but that conclusion is a composite of just 20 cities nationwide — and they’re not even the 20 largest cities. Philadelphia, Houston and San Jose are conspicuously absent from the Case-Shiller list.

So why are reports like the Home Price and the Case-Shiller Index even published at all? Because, as national indicators, they help governments make policy, businesses make decisions, and banks make guidelines. Entities like that are national and require data that describe the economy as a whole. Home buyers and sellers, by contrast, need it locally.