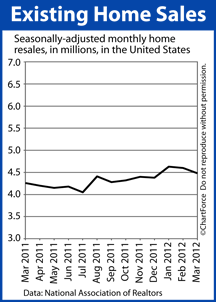 According to the National Association of REALTORS®, March 2012 Existing Home Sales fell to 4.48 million units on a seasonally-adjusted annualized basis — a 3 percent drop from February.

An “existing home” is a home that’s been previously occupied or owned.

The weaker-than-expected Existing Home Sales data is the third such housing report this month to suggest a lull in the spring housing market. Earlier this week, homebuilder confidence slipped for the first time in three months and March Single-Family Housing Starts fell, too.

The news wasn’t entirely bad for home resales, however. Although total home units sold decreased, so did the number of homes available for sale. There were just 2.37 million homes for sale nationwide in March, a 2 percent drop from the month prior.

At the current pace of sales, therefore, the entire nation’s home resale stock would “sell out” in 6.3 months. This is the second-fastest pace since the housing market’s April 2007 peak.

A 6-month supply is widely believed to represent a market in balance between buyers and sellers.

The March Existing Home Sales data shows that — despite record-low mortgage rates nationwide — buyer activity in Walnut Creek is slowing, and seller activity may be slowing, too.

So long as the two forces remain in balance, home prices should do the same. This is the law of Supply and Demand at work.

However, if home sales continue to slide and home inventory builds, buyers may find themselves with an edge in negotiations.

If you’re planning to buy a home in 2012, the long-term housing trend is still toward recovery. This season may be a good time to look at your options. Talk to your real estate agent to see what’s available. Low mortgage rates may persist, but low home prices may not.