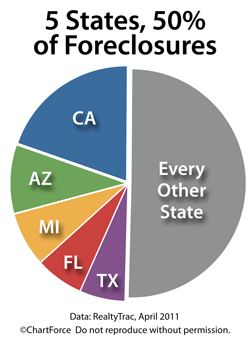 Based on data from foreclosure-tracking firm RealtyTrac, foreclosure filings nationwide fell below 220,000 in April 2011, a 9 percent decrease from March.

A “foreclosure filing” is defined as any foreclosure-related action including Notice of Default, Scheduled Auction, or Bank Repossession.

April marks the seventh straight month in which foreclosure filings have dropped and total filings are down more than one-third year-over-year.

One reason why filings are down is that banks are letting more time pass between delinquency and foreclosure, exploring alternative courses of actions such as short sales and loan modifications. It now takes, on average, 400 days from an initial default notice to bank repossession.

Another reason may be that job growth is returning to the U.S. and job creation is associated with fewer home loan defaults.

Regardless, in the states in which foreclosures are occurring, bank repossessions are concentrating among just a few.

5 states accounted for half of the country’s April REO:

Collectively, these 5 states represent just 32 percent of the nation’s population.

On the other end of the chart, Vermont accounted for a measly 0.007% of April’s foreclosure filings.

If you’re a first-time home buyer considering foreclosed homes in Lafayette , or a seasoned investor adding to your portfolio, the good news is that foreclosures are selling at steep, 20 percent discounts relative to non-distressed homes. Just make you know what you’re buying. Foreclosure purchases carry different risks and follow different procedures than “traditional” sales.

Rely on a seasoned real estate agent to navigate the deal.