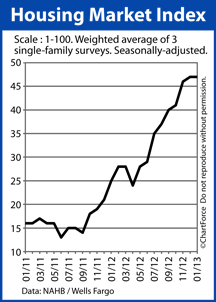 The National Association of Homebuilders (NAHB) Housing Market Index ended its 8-month winning streak this month, posting a value of 47. The January 2013 reading is on level with last month, and remains at a near 7-year high.

The Housing Market Index (HMI) is a measure of home builder confidence.

Not since April 2006 has the Housing Market Index crossed into “good” territory, but the past two years have witnessed the HMI nearly triple; and the index is up from a reading of 25 just twelve months ago.

Values would have likely increased this month, too, if not for builder uncertainty. The NAHB cites concern over prolonged legislative decisions as contributing factors to this month’s builder confidence reading. Specifically, the trade group expressed concern over the future of the federal income tax deduction for home mortgage interest and spending cuts related to the recent, so-called “fiscal cliff”.

As compared to the month prior, this month’s HMI showed the following :

January marks the tenth consecutive month through which buyer foot traffic has increased. Foot traffic is now at its highest level in nearly 7 years.

The NAHB Housing Market Index suggests a slow, steady rise in confidence among the nation’s home builders. This is occurring, in part, because of improving housing market conditions both nationally and regionally. Another factor is rising confidence among today’s home buyers.

Home sale prices Lafayette remain relatively low and mortgage rates sit below 4 percent. With demand for homes growing, prices are expected to rise. Home buyers this season may be more likely to get a good “deal” than the buyers of spring or summer.