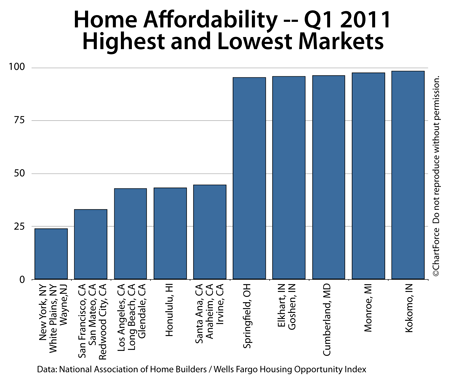 Nearly 3 of 4 homes sold between January-March 2011 were affordable to households earning the national median income of $64,400. It’s the 9th straight quarter in which home affordability surpassed 70 percent, and the highest reading in more than 20 years of record-keeping.

The most affordable “big city” last quarter was Syracuse, New York. With a 94.5% affordability rate, Syracuse ranks 8th nationally in the Home Opportunity Index. It’s the second time that Syracuse placed first in the last 4 quarters.

Meanwhile, on the opposite end of home affordability, the “Least Affordable Major City” title went to the New York-White Plains, NY-Wayne, NJ area for the 12th consecutive quarter. Just 24.1 percent of homes were affordable to households earning the area median income, down more than 1 percent from the last reading.

Regardless of where you live, remember that rising mortgage rates can levy more pain on your household budget than can rising home values. And mortgage rates are expected to rise long before home prices do.