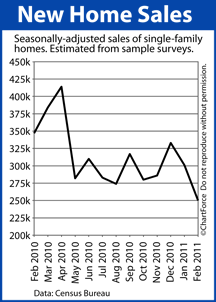 Sales of newly-built homes plunged 17 percent to an seasonally-adjusted, annualized 250,000 units in February, and the supply of new homes rose to 8.9 months in February — a 1.5 month jump from January.

It’s the lowest New Home Sales reading in recorded history, according to the Census Bureau, and the third straight report to signal that home values may be slow to rise in Lafayette and nationwide this season.

The media has picked up on the trend, too.

Because the Margin of Error exceeds the measured reading, February’s New Home Sales figures are of “zero confidence”. The Census Bureau even says as much in its report.

Or, if the initial reading is accurate, a second story emerges. Namely, how an increase in home supply may help this season’s buyers to negotiate better prices for a home, and upgrades from a builder.

There’s often more to a real estate story than its headline and February’s New Home Sales proves it.