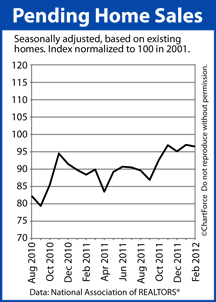 The housing market took a step back in February, but remains near post-recession highs.

According to data from the National Association of REALTORS®, February’s Pending Home Sales Index slipped 0.5 percent from the month prior, to 96.5.

The Pending Home Sales Index is a monthly report which measures the number of homes under contract to sell, but not yet sold, nationwide.

Mild weather may have helped the Midwest Region last month but even regional data can only tell us so much. Like everything in real estate, housing data must be local to be relevant.

It’s why we can’t put too much stock in national housing news. Buyers don’t buy nationally — they buy locally.