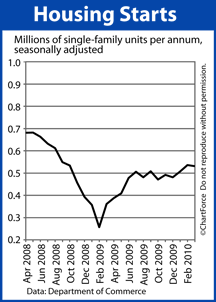 After a strong March showing and a surprise upward-revision for February, Housing Starts are, once again, trending better.

It’s yet another signal that the housing market in San Fransisco and nationwide is stabilized.

A Housing Start is a new home on which construction has started and, over the last 6 months, home builders are averaging one half-million starts per month.

This marks the highest 6-month average since 2008 and a reading one-fifth percent better from 12 months ago.  Revisions to prior data have all been higher, too.

Even more interesting, though, is that the number of newly-issued building permits is exploding. Permits were up more than 5 percent last month and have climbed back to the levels of late-2008.

Housing permits are an important data point in housing because permits are precursors to actual housing starts.  According to the Census Bureau, 82% of homes start construction within 60 days of permit-issuance.

Therefore, because March’s housing permits increased, we should expect Housing Starts to continue to rise into the early months of summer.

This, too, reflects well on housing because the federal home buyer tax credit won’t be in existence this summer. The simple fact the homes are being built now shows that housing is likely to expand even after the tax credit expires.