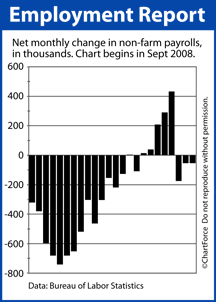 On the first Friday of each month, the Bureau of Labor Statistics releases Non-Farm Payrolls data for the month prior.

The data is more commonly called “the jobs report” and it’s a major factor in setting mortgage rates for residents of California and homeowners everywhere. Especially today, considering the economy.

This is because, although it’s believed that the recession of 2009 is over, there’s emerging talk of new recession starting.

Support for the argument is mixed:

In other words, the economy could go in either direction in the latter half of 2010 and the jobs market may be the key. More working Americans means more paychecks earned, more taxes paid, and more money spent; plus, the confidence to purchase a “big ticket” items such as a home.

Jobs growth can provide tremendous support for housing, too.

Today, though, jobs growth was “fair”. According to the government, 54,000 jobs were lost in August, but that reflects the departure of 114,000 Census workers.  The private sector (i.e. non-government jobs), by contrast, added 67,000.

In addition, net new jobs was revised higher for June and July by a total of 123,000.  That’s a good-sized number, too.

Right now, Wall Street is reacting with enthusiasm, bidding up stocks at the expense of bonds — including mortgage-backed bonds.  This is causing mortgage rates to rise.  Rates should be higher by about 1/8 percent this morning.