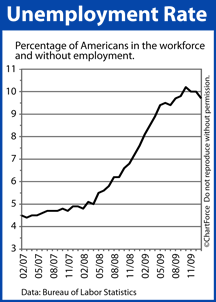 Conforming and FHA mortgage rates in California have improved over the last 10 days, but that could all change this Friday with the release of February’s Non-Farm Payrolls report.

Non-Farm Payrolls is the official name of the government’s monthly jobs report and, given the fragile state of the U.S. economy, Wall Street will be watching it closely.

Jobs are an important part of the nation’s recovery. Among other concerns, unemployed Americans don’t spend as much money on goods and services, and are more likely to default on a mortgage. This retards economic growth and increases the potential for foreclosures.

When jobs numbers worsen, therefore, it follows that economic projections worsen, too.

Analysts expect that a net 30,000 jobs were lost in February.

The Bureau of Labor Statistics press release hits at 8:30 A.M. ET, roughly an hour before Friday’s mortgage pricing will be available to consumers. If you’re worried about rates rising on the heels of a strong jobs report, therefore, be sure to get your rate lock in today instead. Once Friday gets here, it may be too late.