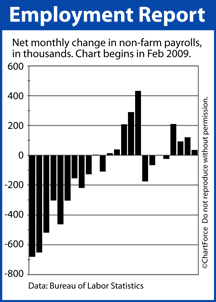 Americans are getting back to work. Sort of.

This morning, at 8:30 AM ET, the Bureau of Labor Statistics released its Non-Farm Payrolls report for January 2011. More commonly called “the jobs report”, the government’s data showed a large decrease in the number of working Americans as compared to December, but a sizable drop in the Unemployment Rate.

The job growth figures were much lower than consensus estimates:

Today’s jobs report is rough news for home buyers and rate shoppers in Lafayette. Shortly after the report’s release, Wall Street is attributing the low jobs number to “bad weather” and is choosing to focus on the strong Unemployment Rate instead.

U.S. stock futures are now rising ahead of open, an increase that will come at the expense of the bond markets. Indeed, mortgage-backed bonds are losing this morning already.

Conforming mortgage rates are expected to start the day at least +0.125% from Thursday’s close and, if momentum continues, could tack on an additional +0.125% before today’s closing bell.

The government’s report is an excellent example of how important jobs data can be to home affordability — especially in a recovering economy.

If you have not yet locked a mortgage rate, consider locking one today. On the heels of today’s jobs data, 30-year fixed rates will scratch at their highest levels of the year.