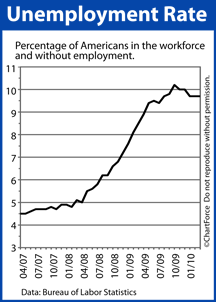 On the first Friday of every month, the U.S. government releases its Non-Farm Payrolls report.

More commonly called “the jobs report”, Non-Farm Payrolls is a major market mover. The number of working Americans is directly tied to the health of the economy which, in turn, drives the stock and bond markets.

In general, when jobs numbers improve, it’s good for stocks and bad for mortgage bonds. It follows, therefore, that conforming mortgage rates in California rise because rates always move opposite of mortgage bond prices.

Conversely, when jobs numbers worsen, it tends to be bad for stocks and good for mortgage bonds.  Mortgage rates fall.

Despite 290,000 jobs created in April 2010 — nearly twice the expected amount — and a 40 percent upward revision of March’s numbers, mortgage rates are essentially unchanged.

In a normal environment, rates would be higher.  Today is not normal.

Today is a departure because, for all of the jobs report’s import to Wall Street, it’s less important to markets than what’s happening in Greece right now.

Greece is struggling to meet its debt obligations and its citizens are rioting.

Until a debt solution for Greece is made that sticks, unrest in the region will drive safe haven buying both domestically and abroad. U.S. mortgage bonds will gain on that movement because mortgage bonds are “safe”, and mortgage rates will fall.

Indeed, this is exactly what’s been happening since the start of April. Mortgage markets have been rallying for 5 weeks.

So, today’s jobs news is terrific for the economy and mortgage rates should be rising because of it.  But, they’re not. Consider taking advantage — lock in a rate.