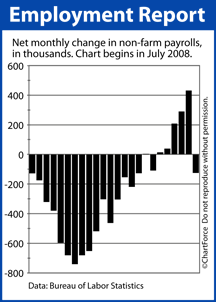 Mortgage rates have been falling since April but that momentum could reverse tomorrow.

The Bureau of Labor Statistics releases the July jobs report at 8:30 A.M. ET Friday. With a stronger-than-expected reading, mortgage rates should rise, harming home affordability in California. Jobs are a keystone in economic growth and growth is tied to rates.

Earlier this year, job growth went positive and reached as far north as 431,000 jobs created in May. That figure slipped negative last month, however, as the temporary, decennial census workers left the workforce.

Jobs matter to the U.S. economy. Among other concerns, unemployed Americans spend less on everyday goods and services, and are more likely to stop payments on a mortgage. These effects retard the economy, spur foreclosures, and harm home values.

Analysts expect that a net 65,000 jobs were lost in July. Wall Street — and Main Street — have a big interest in those results.

Poor jobs data would likely result in a stock market sell-off which would, in turn, boost the value of government-backed mortgage bonds. This is because bonds tend to perform well when the economy is sagging and higher bond prices mean lower mortgage rates.

Strong jobs data, however, would likely push stock markets up and bond markets down. This would cause mortgage rates to rise. The stronger the employment figures, the higher mortgage rates should go.

So, if you’re happy with where mortgage rates are today and you’re concerned about what the jobs report may do to them tomorrow, consider talking to your loan officer about locking your rate as soon as possible.

Once the jobs report is released, it may be too late.