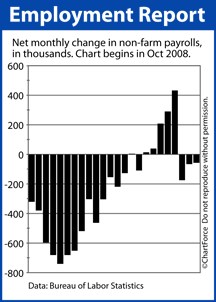 The report hit the wires at 8:30 AM ET this morning.

More commonly called “the jobs report”, the government’s non-farm payrolls data influences stock and bond markets, and, in the process, swings a big stick with home affordability figures in Walnut Creek and nationwide.

Although the recession has been deemed over, Wall Street remains unconvinced. Data fails to show the economy moving strongly in one direction or the other and, absent job creation, economists believe growth to be illusionary.

And the cycle continues.

And that brings us to today’s jobs data.

According to the government, 95,000 jobs were lost in September. Economists expected a net loss of 5,000.  However, if public sector jobs are excluded from the final figures, jobs grew by 64,000.  This is a positive for the private-sector, but still trailed expectations.

So, although the September 2010 jobs report doesn’t reflect well on the economy overall, home affordability in California and around the country should improve as a result.