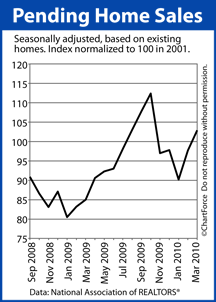 The Pending Home Sales Index moved higher in March as home sales were spurred by low mortgage rates and an expiring tax credit.

A “pending home” is a property that is under contract to sell, but not yet closed.

March marks the second straight month in which the Pending Home Sales Index improved after a series of weak showings this past winter.

March showed a 5 percent increase over the month, but the Pending Home Sales Index is still off its October 2009’s peak.  October 2009 is a comparable period to March 2010 in that it marked the 1-month deadline before the home buyer tax credit’s initial expiration date. The credit was later extended to April 2010, of course.

That said, March’s surge in sales is being felt on the street.

Home buyers in San Fransisco no doubt noticed the change in activity. Around the country, anecdotally, multiple offer situations were more common last month and “right-priced” homes tended to go under contract quickly.

The increase in March’s Pending Home Sales is diminishing the nation’s home supply which, in turn, should cause prices to rise in most markets — including Orinda.

Today’s buyers should consider making an offer sooner rather than later.  Looking at the data, it appears the best time to have found a “deal” on a home may have been in February.