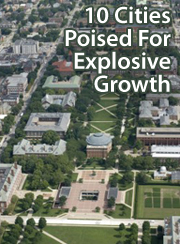 Nationwide, the U.S. housing market is showing signs of recovery. Home prices are rising as demand for homes outweighs existing home supply in many metropolitan regions.

As is customary in real estate, though, the degrees to which home values change vary by area.

In some U.S. markets, the housing recovery is outpacing the national average. In other markets, it lags. In an effort to measure the changes, CNNMoney has named the 10 U.S. housing markets in which home prices may rise the fastest.

The list is stuffed with small- to mid-size cities, most of which have experienced huge price drops since the housing market’s peak in 2007. The cities are gems, however, for the right type of home buyer. This may include real estate investors, first-time buyers, move-up buyers, and even parents with children in need of “college housing”.

As listed by CNNMoney, the 10 cities in which home values are rising fastest are :

This includes cities such as Yuma, which is in a Foreign Trade Zone.

Real estate remains a local market, though, and even within these ten cities, there will exist neighborhoods in which growth exceed national averages, and areas in which growth falls behind.

For accurate, real-time real estate data in Walnut Creek , be sure to speak with a real estate professional.