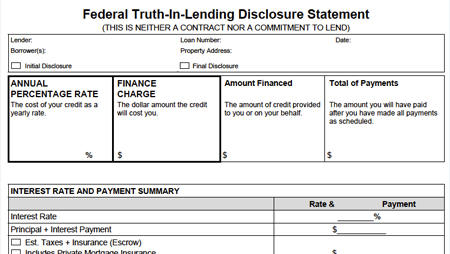 More commonly called APR, Annual Percentage Rate is a government-mandated mortgage comparison tool. It measures the total cost of borrowing over the life of a loan into dollars-and-cents.

A loan’s APR is printed in the top-left corner of the Federal Truth-In-Lending Disclosure, as shown above. When quoting an interest rate, loan officers are required by law to disclose a loan’s APR, too.

APR makes assumptions in its formula that can render it moot.

First, APR assumes you’ll pay your mortgage off at term, at never sooner. So, if your loan is a 15-year fixed rate, its APR is based on a full 15 year term. If you sell or refinance prior to Year 15, the math used to make your loan’s APR becomes instantly flawed and “wrong”.

Second, APR can be “doctored” early in the loan process.

Because the APR formula accounts for third-party costs in a mortgage transaction, and third-party costs aren’t always known at the start of a loan, a bank can inadvertently understate them. This would make the APR appear lower than what it really is, and may mislead a consumer.

And, lastly, APR is particurly unhelpful for adjustable-rate loans. Because the APR calculation makes assumptions about how a loan will adjust during its 30-year term, if two lenders use a different set of assumptions, their APRs will differ — even if the loans are identical in every other way. The lender whose adjustments are most aggressively-low will present the lowest APR.

Summarized, APR is not the metric for comparing mortgages — it’s a metric. For relevant comparison points, talk to your loan officer.