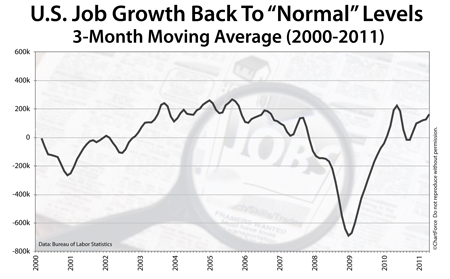 Be prepared for Friday morning. Mortgage rates and home affordability could worsen quickly. At 8:30 AM ET, the Bureau of Labor Statistics releases its April Non-Farm Payrolls report and momentum has been strong.

The monthly jobs report is a market-mover and analysts expect that 196,000 new jobs were added last month. If those expectations are exceeded — by even a little — Wall Street would take it mean “economic strength” and the stock market would be boosted.

Too bad for rate shoppers, though; a move like that would also lead to higher mortgage rates throughout California. This is because, coming out of a recession, reports of economic strength tend to push mortgage rates up. We’ve seen it happen multiple times in the last 8 months.

Since losing more than 7 million jobs between 2008 and 2009, employers have added 1.3 million jobs back to the economy. And we’re learning that there’s plans for fewer job cuts in the future. It’s clear that the jobs market is improving and this is why tomorrow’s Non-Farm Payrolls report is so important.

A “weak economy” helped keep mortgage rates low for a very long time. A strengthening economy will reverse that tide.

So, consider your personal risk tolerance today, in advance of tomorrow’s Non-Farm Payrolls report. If the thought of rising mortgage rates makes you nervous, call your loan officer and lock in a rate today. Once tomorrow’s data is released, after all, the market might look changed.