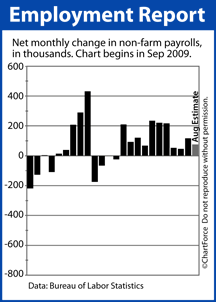 If you’re shopping for a mortgage rate, today may be a good day to lock one down. That’s because Friday morning, the Bureau of Labor Statistics will release its Non-Farm Payrolls report for August 2011.

The “jobs report” tends to have a big influence on mortgage bonds and mortgage rates in Lafayette.

The jobs report is a monthly issuance, providing sector-by-sector analysis of the U.S. workforce. It also report the national Unemployment Rate.

Wall Street expects the August Non-Farm Payrolls data to show 75,000 jobs created in August, down from 117,000 in July; and it expects that the Unemployment Rate will remain unchanged at 9.1%.

The jobs report’s connection to mortgage markets is straight-forward — as jobs go, so goes the economy. This is because when the number of working Americans rises :

These are each good turns in a recovering economy.

Conversely, if job creation falls short of 75,000 in August, mortgage rates are expected to rise.

Home affordability remains at all-time lows and mortgage rates do, too. If you’ve been wondering whether now is the right time to lock a rate, you can remove some risk by locking ahead of Friday’s Non-Farm Payrolls release.